Some Things I Remember About My Father

On February 17, 2005, my father died at the age of 94. He was my best friend and for the last 10 years of his life, he lived with me in South Florida. It’s an experience I wouldn’t trade for anything. I love him as much today as I did then, the only difference is . . . now I miss him! 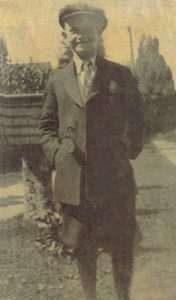 Dad was born in 1910 in Colorado and raised by his mother and step-father in a small town called Drummond, in the state of Montana.  His name was Jack Frederick Maxwell. At the age of 13, after lying about his age, he got a part-time job laying railroad tracks out west. Then at the age of 15, after graduating high school, once again he lied about his age and joined the US Navy. He made the Navy his home for the next 46 years, 30 years on active duty and 16 years as a civilian working for Grumman Aerospace, which contracted him right back to the to the Navy Department . . . he even kept the same desk.

He told me stories about how he and his cousin used to hunt in the mountains when they were kids. Years later I traveled back there with him to visit his mother, and his mountain was a hill with some trees. Funny how kids remember things. He talked about his step-dad, Finn, and how Finn taught him to become a man at a very early age. One story Dad told happened just before Christmas when he was only eight years old, and he would walk to and from school, past the country store. In the window there was a toy train set that the store owner would wind up for him . . .  just a few tracks, an engine and a caboose. He wanted that train set in the worst way. Finally, Finn bought it for him and Christmas morning he woke up early, all excited, and opened his present. Right away he put it together, wound it up and watched it go round and round. When it stopped, he would wind it up again and watch it some more, just mesmerized. Finn finally called him to breakfast a few times, but Dad kept playing with his new train. Finn called him a third time and told him that he was calling him for the last time. Like a kid, Dad just kept playing. With that, Finn walked over to him and picked up the whole set, took it out back, and that was the last time my dad ever saw it. Parents and kids were different back then. Lessons were tough, and so were the people. But my father said that from then on, when Finn called him to breakfast, he came to breakfast. Finn was part of that early stock, covered wagons and all. Finn was tough, but my dad really loved him

Dad also loved the Navy. He began his career as an enlisted man at the bottom of the ladder. He worked his way up through the ranks, was eventually commissioned, and retired as a Lieutenant Commander in 1956.

Having been in the Navy for 30 years, Dad had tons of stories. Like how he was one of the first US Military personnel to be “lent” during Lend Lease. And, during WWII, one of his many assignments was serving on the Aircraft Carrier, Wasp. When the Wasp was torpedoed and went down, Dad was in the water for six hours holding on to a bamboo pole . . . and he didn’t know how to swim then, or since. Then, after the war, there were all the times he and some of his fly-buddies would fly (sneak) into Cuba for supplies of booze, cigars and whatever else they could round up. 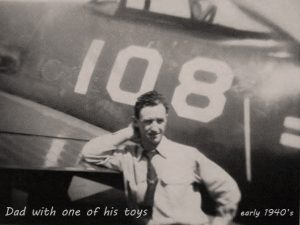 Dad With One of his Toys

My dad was young and carefree, and somewhat of a rebel, but once he met my mom that was it. In 1945 they married and I was born a year later. 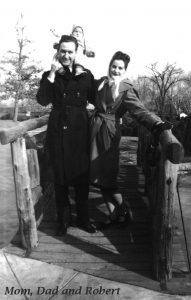 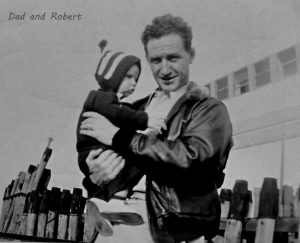 My mother was from an Italian family and it was quite a contrast. A young Catholic, Italian girl from Brooklyn meets a handsome, young but experienced and adventurous naval officer. Before too long he was part of the family. My mom’s family took to him like a son.

They stayed married for more than 50 years until my Mom died in 1999. 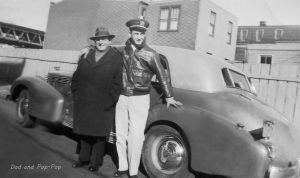 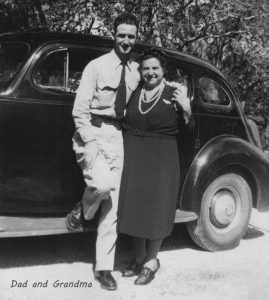 As a child, I remember so many nights when Dad would surprise us with White Castle hamburgers for dinner. And almost every Sunday he would make pancakes . . . from scratch! Enough to feed all the kids in the neighborhood. They were the best “hotcakes” in the world. (Funny how kids remember things.) When dad retired from the Navy, I was ten and my brother Jack was seven. Dad went to work for Grumman and whenever he had to travel, he would try to take us with him. There was one place in Rhode Island that we would go to a lot, Grey’s Motel. During the day he would go to work and the lifeguard at the pool would baby sit for us. At the end of the day after work, he would play with us in our motel room until we fell asleep. Dad was cool!

One 4th of July, as kids would be kids, my brother Jack and I were throwing firecrackers in the street in front of our house with our friends. One of them exploded a little too close to the Good Humor truck. (Accident? . . . maybe). The Good Humor man didn’t appreciate the fun we were having and when he stopped to yell at us, he grabbed my brother Jack to let us know just how mad he really was. My dad was across the street sitting on a neighbor’s steps and when he saw that happen, he ran over to us and beat up the Good Humor man. Actually, he gave him a pretty good beating. Dad was real cool! Even though he was as tough as the next guy, Dad never acted like a “tough guy”. He just loved his kids.

Whenever the family would go on vacation, the whole family would go – our parents, grand parents, aunts and uncles, and all my cousins. It was a good size Italian family. Usually it was this place in the Catskill Mountains. Dad would take Jack and me to the top of a big hill that overlooked the resort and we would sit under a big tree for hours, and we would talk and play . . . play anything and talk about everything. Dad wasn’t a loner but I think at that point in his life he just loved spending time with his boys.

But then Dad was also the Naval officer, used to giving orders and having them carried out. In my very early years, I was taught to say “yes, sir” and “no, ma’am” to any grownup. Well behaved, polite and respectful, that’s how he wanted it and that’s how he got it. Then came Jack Jr. 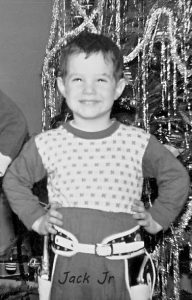 By that time, things had eased up a bit. Good thing because Jack could be a little rebellious at times. Dad still expected us to do as we were told and most of the time we did. But that didn’t always happen. Like the time we were all at the dinner table having spaghetti for dinner. Dinner had just started and Jack decided he didn’t want anymore. Well dad told him to finish his dinner and Jack said no. Dad said eat, Jack said no. Dad told him he wasn’t going to tell him again, and to eat it or wear it. Well Jack said no, and Dad picked up that plate of spaghetti and dumped it on Jack’s head . . . he ended up wearing it. Then I got in trouble for laughing. Dad was definitely cool!

Growing up, my brothers and I almost never wanted for anything. It wasn’t until I was in my 30’s that my mother and father both told me that, when he worked on Long Island for Grumman, there were some days that he went to work with just enough money for a toll, 10 cents! He made sacrifices for all of us, I’m sure even more than I know about now.

Before dad retired, I was 4 or 5 years old and we were living in Rhode Island. Every morning, everybody on the block would leave for work about the same time. He said that I would stand at the front door and yell to him “Work easy, Daddy, work easy”. Fifty years later he was saying that to me. When I would leave for work in the morning, he would tell me to work easy. “Work easy, Rob, work easy” he would say. He got such a kick out of saying that. Dad’s bedroom was on the 1st floor and mine was upstairs. Every night he would shout up to me “Goodnight Rob” and I would answer “Goodnight Dad.” For the first couple of weeks or so after he died, I could swear I heard him calling goodnight to me. I actually had to sleep someplace else for a while.

In 1967, we were in Vietnam at the same time. Dad was on the aircraft carrier Constellation and I was in-country. We were supposed to meet in Japan for R & R . . . I made it and he got stuck at sea. That would have been so much fun spending a week in Tokyo with my dad!

The last couple of years of his life, I could see something was different. Something was gone. It was sad, because he really loved the military and he really loved this country. His feelings for the military never changed but he was disappointed with the direction the country was going in. He would say “Right after 9-11 the whole world was on our side. Today it’s us, Great Britain, and a few other small countries. Before too long it’s going to be us against the world.” Dad was well read about history, especially wars, and he saw it coming. He told me “They had me at Afghanistan . . . they lost me in Iraq.” He would watch the news at night and I would catch him crying. We would talk about it, soldiers dying and I would talk about my experiences in Vietnam and then we would both be crying. He was delicate then and very sensitive. It broke my heart to see him like that.

He never wanted to be a burden to anyone. He came to live with me because, out of his four sons, I was the only one living by myself and my brothers all had families. Dad always told me that he didn’t know what he’d do without me. The truth is that Dad could have lived with any one of my brothers if he had asked them and he knew that.

Dad spent his last days in hospice. Even though he was dying, the greatest memory I have of my dad is our last, though brief, conversation.  I said “I love you Dad” and he said “I love you too, Rob.” Those were the last words we ever spoke to each other.

This picture was taken at a Memorial Day celebration in 2003. Dad was singled out as the oldest veteran there. He was proud of that. He was 92. 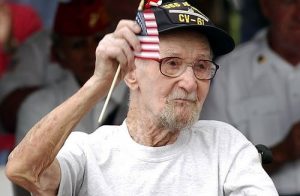 How do you thank someone for being your father?

He always was and always will be my hero.

I love him and I miss him.

6 Comments on Some Things I Remember About My Father

Fields marked with * are required